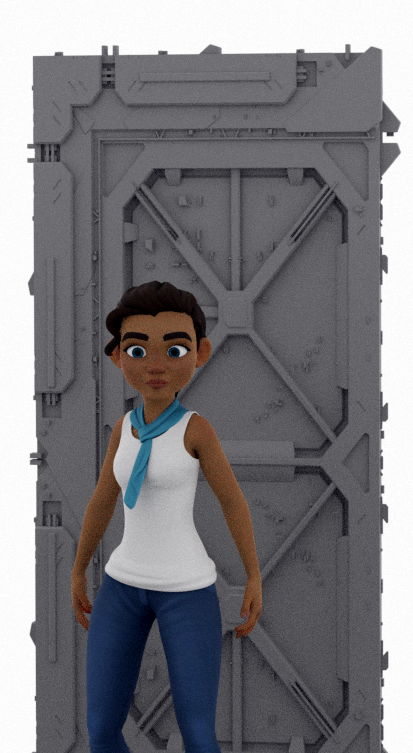 My frustration with Maya trying to finish the Flava project shifted me to Blender with a little bit more urgency. My learning method might be considered a little unorthodox. Some might call it insane. Truth is, this is pretty much how I’ve learned everything: on an actual task rather than a ‘Blender 101’ approach.

What people should do when learning something new is find a manual, a series of tutorials, take a master class or go to a professional school. That method works for a lot of people. No hate on that whatsoever.

What works for me, at least in the case of Blender, is I set up a specific project idea, storyboard what Im trying to do (with my meager art skills), jump into Blender and start the process. For the plentiful things I don’t know, I google, research, and target that specific thing … find and fix the problem … and incrementally keep the project moving. Between yesterday and this morning, I learned a lot about Blender that I didn’t know before.

It helps, like by 1000%, to have experience with similar software. Generally speaking, while working in Blender, I’m searching for familiar ground from Maya. It’s easier to question what you’re looking for if you’ve used it before. Can I switch to Stepped keyframes? Can I open an image plane? Where are the transform controls I’m used to? Blender allows you to switch to a keymap that would be considered ‘industry standard’ that made the transition soooo much better.

What’s happening now is I’ve imported a few FBX objects necessary for the scene. The texturing came over from the original 3DS Max files I worked on originally so that was wonderful. Still need tightening up. But that’s later.

I’m using the Blender Rain V2 character and one other. Pre-rigged characters options are mighty slim considering how long Blender’s been out on the market. It’s funny, too. The rigs available are from previously outstanding animations created by Blender but you don’t see a lot of people animating with the rigs on a general basis. Like, I can find Malcolm animations from AnimSchool everywhere. As well as other Maya-related characters.

There are some elements of the rig I’m not crazy about using Rain. Somethings I’m not smoothly accessing during the animation process either. Like when you change to Industry Standard, the ability to move up and down keyframes isnt available. On the regular Blender keymap, it’s the up and down arrows. Unfortunately, switch off from that and it disappears. Still looking to see how to customize the keymaps without needing to learn Python or add another addon.

Regardless, I’m making some good progress.

I think Rain has some ethnicity to her, which is always nice. The one other character they have with color to him ended up being some hip-hop-looking rig called Jay, who was also in an animated featurette by Blender. 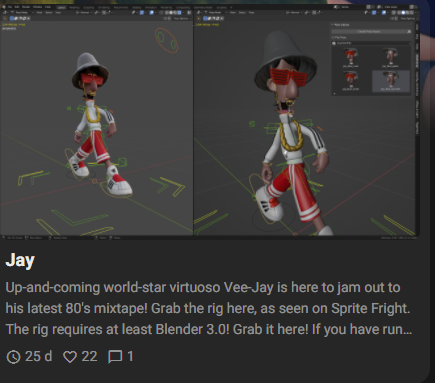 Its that sort of thing that motivates me to try to do more character creation/rigging to develop much more diversity in characters. As much as I hate, hate, hate, HATE the animation I did on Flava in Ya Ear, the reason it’s done so well on TikTok is because of the not often seen factor of Black animated characters. Plus a hot soundtrack doesn’t hurt.

Each day is a little bit more progress and understanding on the use of Blender and animating with it. Every finished project, as a whole, gets me a little better and better with the skillset. Not liking my work helps me want to get better if that makes any sense.

[Incomplete] Flava in Ya Ear