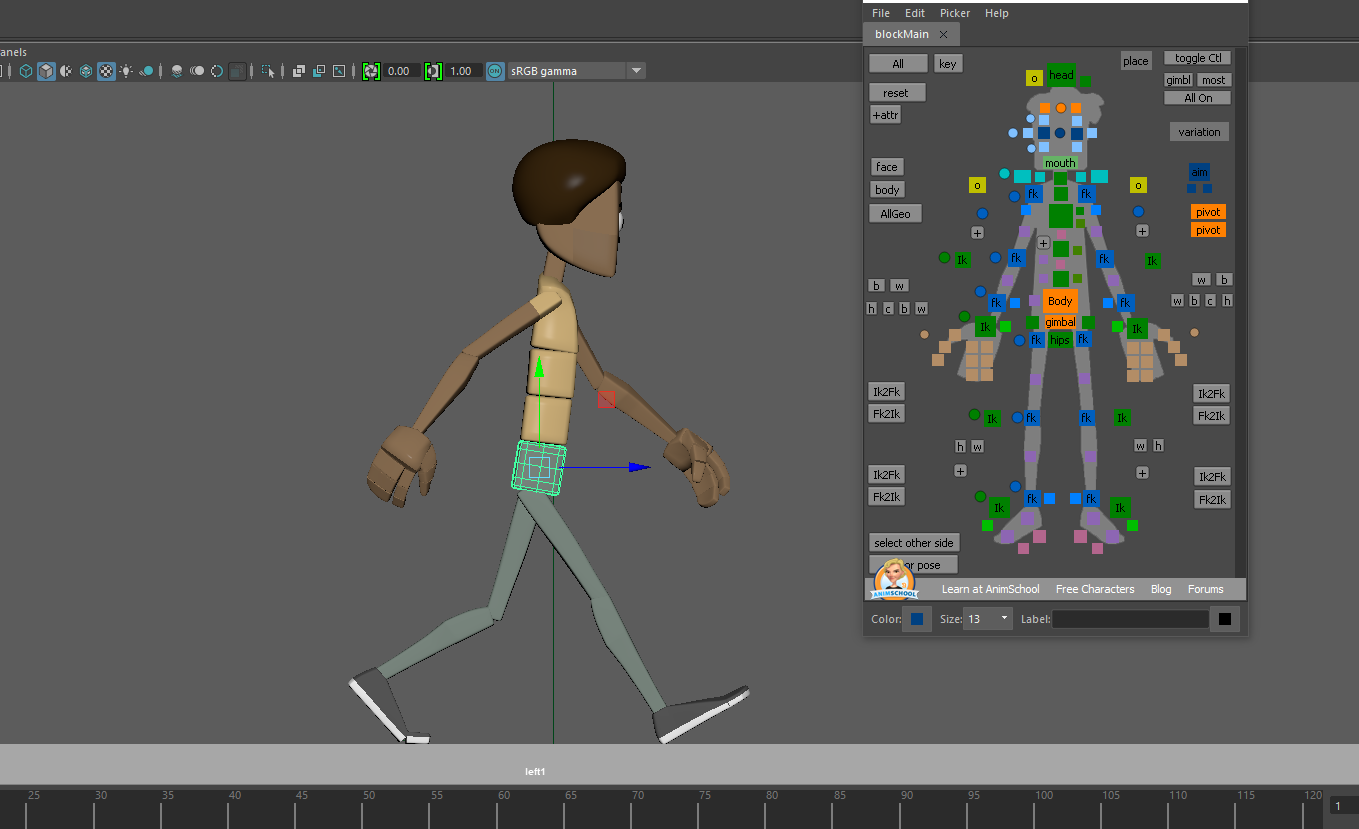 Moving gracefully into Week 3, we’re currently working on splining the blocked character. For the uninitiated, you create the keyframes to a walk first in stepped mode (Blocking). The four or five major steps of the character: up, down, passing, etc. Splining is a setting that tells the computer to blend it all into a natural walk instead of the ridged motion you started with.

This part of the process is a killer because your work can look like a mess when it’s done.

At first, my initial spline attempt looked like an awful mess. Feet going through the floor. Arms all over the place. I was a wreck because I had to hammer this down and still get other school work done. By the way, I got a ‘D’ in this class that sucks in information technology, plummeting my GPA to 3.38 when it was at 3.46. Fuck that teacher anyway. I had him for three different classes and his grading was always the same and I am never in the mood to fight over a fucking grade. It’s enough to get out of his class. I have five months left. I’ve been, generally, an A student for the past three 1/2 years. Again, fuck him. He was a dick that wanted more — no mater what I gave him it wasn’t good enough. This isn’t the fucking ‘Paper Chase’.

Yeah, I’m ticked off. Has nothing to do with animation — but there are likely close similarities if I don’t watch out. I never did get that ‘C’ updated after my changes, come to think of it.

Anyway, splining can do an animator in. There are a lot of methods to do it that I won’t try to relay here. It will only end up sounding like shop talk technobabble. Suffice to say, I’m coming to the conclusion that there are multiple ways of doing animation to get to the final result. All these animators tell you all that matter is what is seen on the screen. How you get there is yours.

Now, consider that when an instructor says “do this THIS way”. What exactly is ‘this way’? How do you grade something when I did it ‘my way’ and the results are someone walking to my preference?

Many types of walks out there. Even a vanilla plain walk to me is not the same to you.

So, in order to research deeply on  how to perfect the spline aspect of my animation, I watched a couple of other classes in AnimSchool to understand how other instructors conveyed the walk process. For the most part, it almost felt like a totally different class. The other instructor covered the same theme, but had a different approach. He mentioned different things—somethings that weren’t covered in my class at the same juncture.

Am I leading up to wanting to switch classes? Hell no. What I’ve learned from this bachelor’s degree at AIU is: plow through. Learn from who you get and just get the fucking grade.

I’m applying that methodology here at AnimSchool without looking back so I can move forward. What I am doing, because I’m a slow learner, is soak in all points of views of how to do the same thing in order to grasp my own method.

Turns out, after reviewing a tutorial on splining on YouTube, this animator reminded me of a technique I used when my work had a semblance of quality. Basically, no need to spline everything. One section at a time. Not everything needs to be splined at all. Totally forgot that method because by the end of the previous class, my instructor was like: when the blocking is done, set everything to spline. Good luck.

Sounds harsh but that’s typical. Almost all tutorials do that. Over the years, I stopped doing the ‘all and good luck’ method and slowly worked every curve individually. I promise you, it takes just as much time to do this as cleaning up a huge mess of curves. I can’t see the things I need to do with everything messed up.

So, remembering my old style, I finally have a walk that I approve, that was better than the first attempt, and I’m tweaking before I upload Saturday for grading.

Yeah, it still jerks in places and the foot goes through the floor. This is part of the trials and tribulations of splining. It’s Friday and I’m tweaking as much as I can until midnight after work. The point is, it’s far better than it was the first attempt. It will only get better. Especially after I get some critique on HOW to get it better.

Another note: the class has a group chat on Discord. Originally, I posted my blocking animation to share with others. Turns out no one else is doing the same so I stopped sharing. I’ll leave it here.

I feel like I’m having this battle discussion with ‘another me’. That other me is like: ‘be friendly’ share your stuff with your classmates as you would in this journal.

Then I’m like: “The fuck are they doing? I don’t see them sharing anything. Why should I be the only one? And then get wayward advice on how to fix things when they’re shit isn’t any better. So, I make the changes that the class suggests, only to get fucked when the instructor says it was wrong.”

I remember something about martial arts. That you go to school to, literally, battle yourself. Not the instructor. Not the other students. It’s about you and your hurdles.

Well, if that’s the case, I don’t need to share shit and just focus on myself.

The ‘other me’ says: don’t be a dick. You can still focus on the self and be friendly. There’s nothing to hide. Share your things because, quite frankly, you bitch constantly nobody looks at your stuff, right?