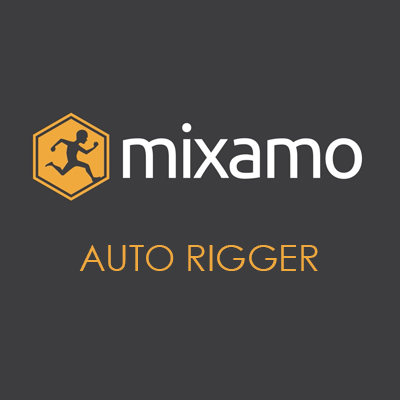 Problem: Love to animate. HATE rigging characters. Mixamo comes along (years back) and tried to fix all of that.

Problem with THAT concept: (Heavy sigh – Where do I begin):

You can google search all day and come up with a thousand responses on the best way to bring poser/Daz3D characters over to established animation packages and get a thousand ways to do it. I’ve spent the better part of the 20th century — when options were even worse — trying to bridge that gap and the results always come back to the simplest fact: you better knuckle down and learn to traditionally rig a model.

So, I’m still interested in creating a custom character in Daz3D and I want to straight animate it in Blender or Maya.

Today’s options for this work are “Daz to Maya Bridge“, utilizing Mixamo to create the rig and importing into Blender and Mixamo to Maya straight FBX.

I tried them both.

The short answer to save you the long read:

The good news: all indications are proven that rigging in BLENDER is far easier than rigging in Maya.

My issue with Mixamo to Blender is the sluggishness I get when trying to animate. There is a cool plug-in that even makes controllers for the imported rig (Provided by Mixamo) which helps a lot but the moment you try to move, say, an arm up and down, it’s like wading through molasses.

Here’s the kicker: the Rain rig was like, 1.3 million faces and an equal amount of verts.

The Daz3D model I imported was only 314, 558 faces, and 449,000 verts. Literally, half the weight/density of an established Blender model and it moved like shit. Couldn’t/wouldn’t animate my character even if I tried.

This is what it looks like after you first import the Mixamo rig to Blender (Daz3D created, to Mixamo first): 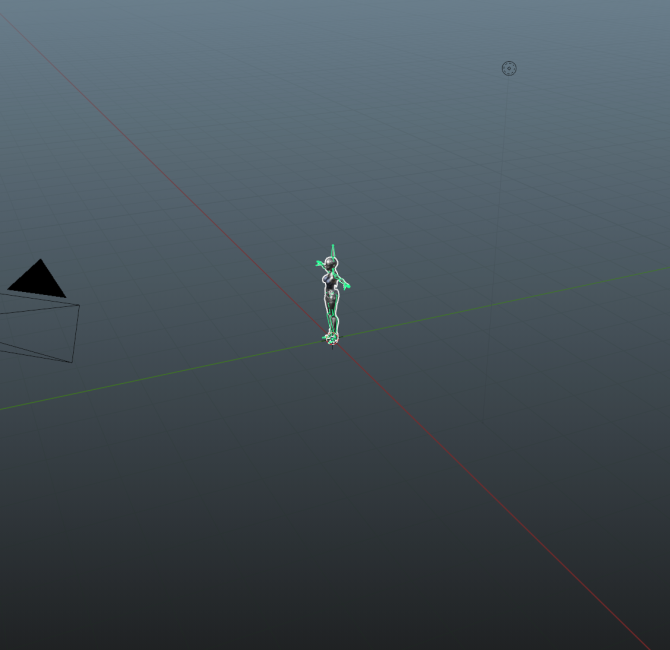 On the flip side, this process has come a long way since the early days of trying to get things around between packages. I mean, does anyone remember when Mixamo was a paid service? Mixamo is free from Adobe. Can’t beat that.

Still, my character comes in smaller than I started. Im sure its a settings thing somewhere.

When you use the Control Rig plugin … 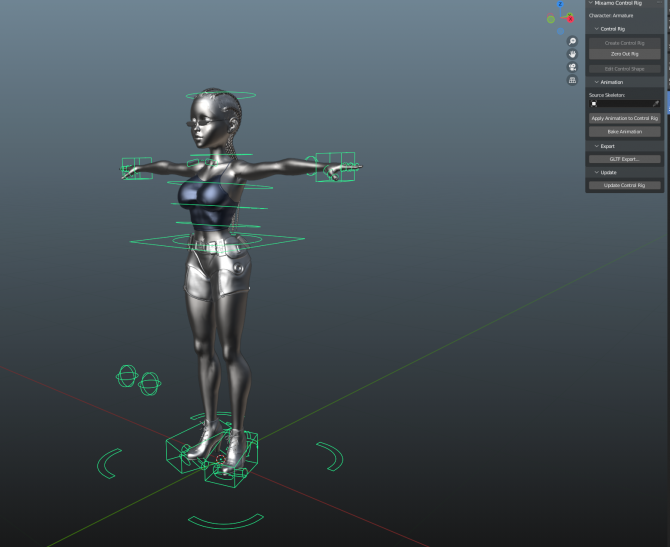 And so from this point, you’re probably like me: GREAT! Zero rigging to do. I got my character from one package through another and into the main animation package. Yay! You’re probably also asking where is the textures to my character. They’re right here when I set to material preview and you’ll see where I start getting annoyed: 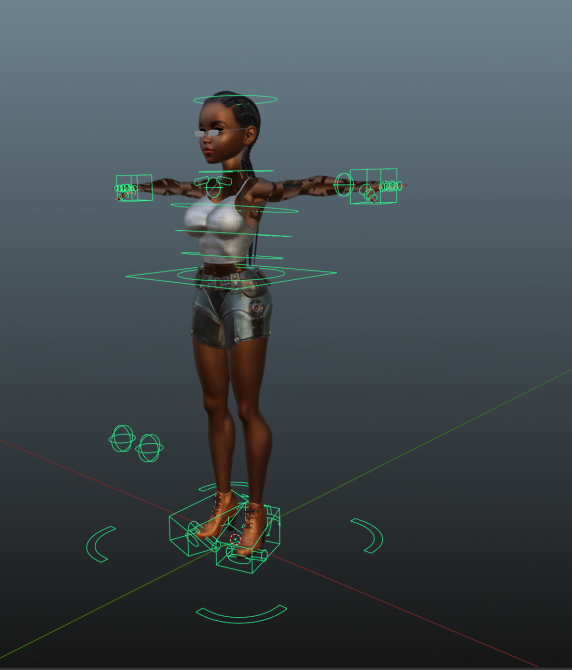 I have no idea why my textures came through so botched. But, interesting thing: this is seen through Blender’s ‘Eevee’ rendered preview. Watch when I switch to ‘Cycles’ and Rendered View…. 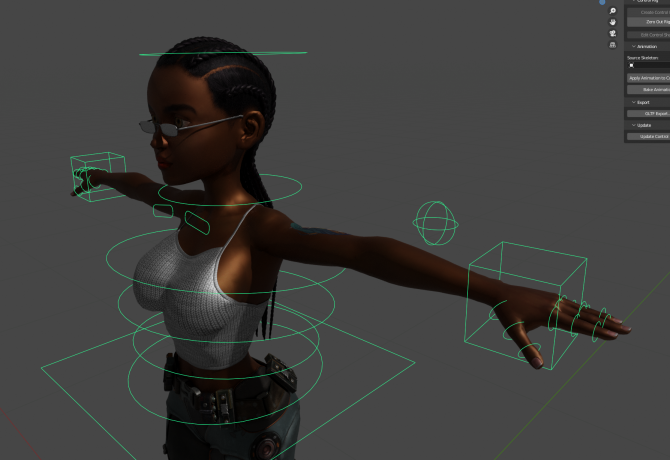 Perfect. Technically, I could animate with the messed up preview version to save time from the system updating constantly with every move during the Cycles rendered view…but I found that incredibly annoying/interesting that, in the end, my textures ported over fine depending on the render engine I’m using.

Now for the meat and potatoes of this whole thing.

So, as you can see: I got my character from Daz3D. It’s rigged through Mixamo, I’m in my primary animation package and it even has a control rig. Here’s the issue:

In the gif, you should be able to see how slow it is to move just the arm up and down. The white cursor should help see the struggle of moving ahead and the arm moving so late. No one can animate under that delay. 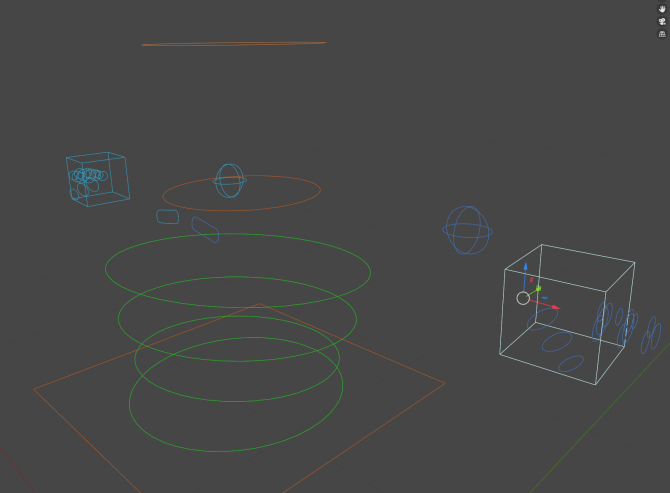 Not sexy or referenceable at all. But it does move faster.

As an animator, and yes, I consider myself one, I shouldn’t have to spend the day dealing with this. Rigging is just not in my skill set. That’s why they have different departments for this. You’ll probably find a good deal of riggers that don’t have a clue about animation. It’s cool. We all should have that focus on a specialty.

But until I can afford a whole department of rigging specialists, these are my trials and tribulations to make it easier.

Mixamo to Maya (FBX) No Plugins

I think it’s worth noting that the file from Mixamo is a rigged FBX file. Meaning I’ve showed you the results importing into Blender and using a Control Rig making plugin. This is what you get bringing it into Maya as a straight FBX from Mixamo. The results are … refreshing. 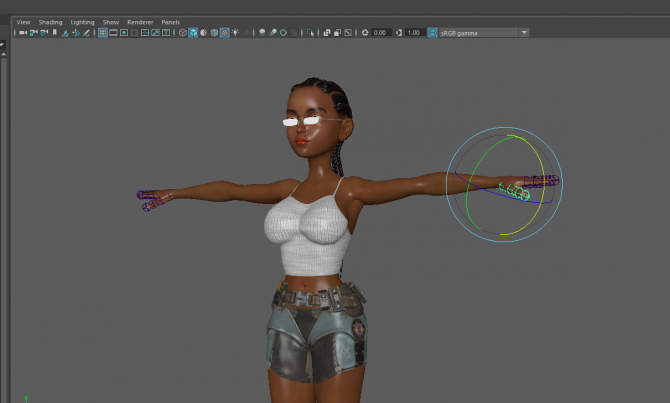 Right off the import, my textures were perfect. No issues and, most importantly, the handling of the mesh was phenomenal.

See how smoothly I can move the bones? There are plenty of IK and FK things to resolve though. The import came with ZERO control rigs or IK/FK maneuverability. But if you ever wanted to get 80% of the way into a rigged character this was it! Out of the options, this was a good way to get your feet wet in Maya rigging since you’ll have to figure out the IK/FK routines and, of course, face rigging with a nearly done mesh at your disposal.

Why Maya handled a Daz3D mesh better than Blender is a little odd.

This was a nightmare at the start. The concept here was that you need to install the free script in Daz3D, export your Daz3D model with that script. A plugin auto loads in Maya and you open the Daz3D rigged character in Maya.

What they don’t tell you is the errors of Maya not reading the saved files. Other shit about not having Python 3 installed. On and on. Give a search on the plentiful issues of people trying to use the Daz3d to Maya bridge and you get a thousand different issues people are having and barely any addressed by Daz3d themselves. They must figure: “Fuck ’em. Its free. Let them work it out”

I had the same issues using Maya 2020. I had to download a quick copy of Maya 2022, install Pymel and cross my fingers. A lot of time was wasted but it worked. 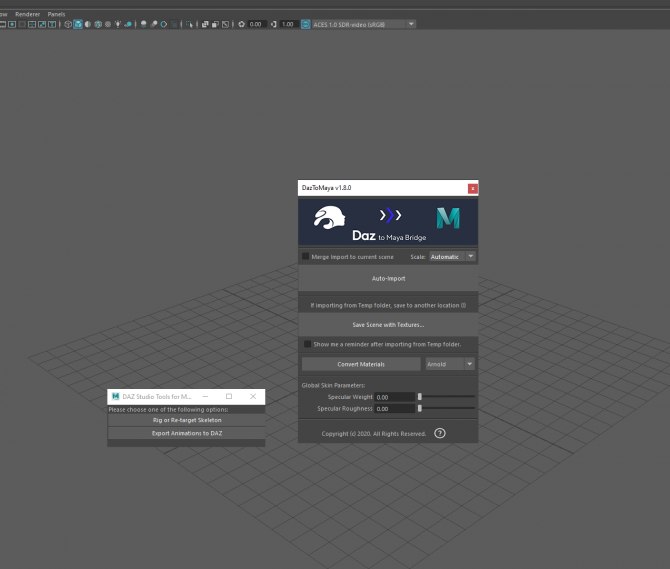 There are options in the Daz3D end to export morphs and such. I tried that once and the import not only took forever but parts were missing. So, tried again with minimal exporting features and this is what you get: 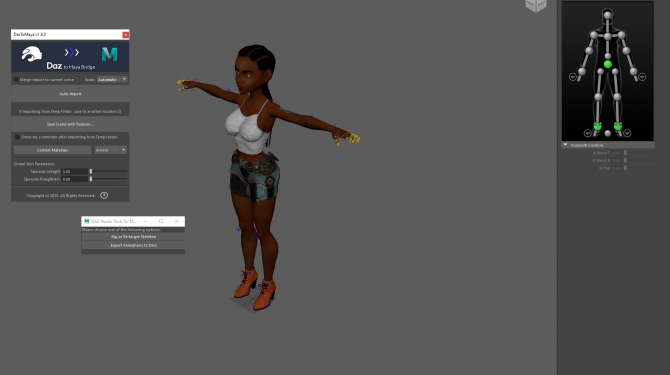 The character came over (minus her glasses) fairly rigged and very fluent in the scene. Unlike Blender with the slow motion of controls, I was fairly impressed.

I actually approve of this import process from Daz but here come the complaints:

I think this is a great option if someone is planning to do an emotionless character in Maya and need a quick rig. I really like how it kept the structure of the character. I just want more freedom to move between other Maya versions In fact, I just had a thought to export the rig in Maya right now to an FBX file and see what happens. What I got was an error saying FBX couldn’t export the constraints. So I’m looking forward to seeing how this will look when I re-load the FBX lol. 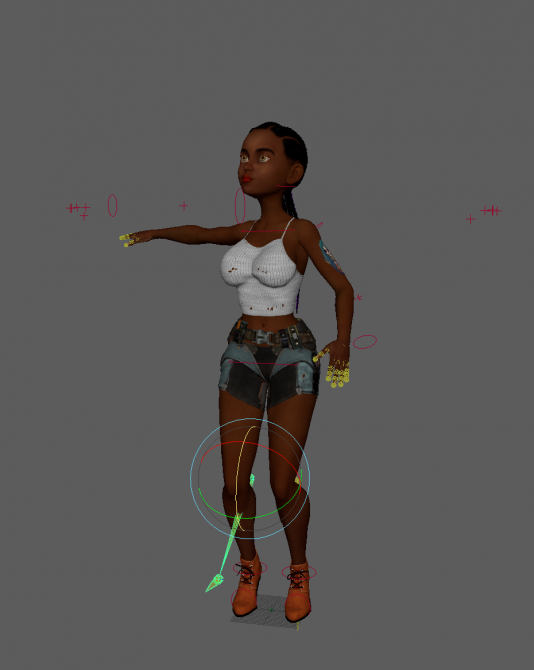 In the end, kind of what I said before, the importing of Poser/Daz3D models is best suited for stationary, vehicles and characters that arent doing much. Like you’re making pre-walking character in the background or something light. When you want that same character to do something not premade, or even smile laugh or talk, well, you’re only going to have to go back to the traditional ways of rigging.

But I got to tell you, I remember the years trying to get Daz3D to Maya or Max and it was a nightmare. This right here is a billion steps ahead and I have to say Im grateful to see the harmony finally happening between packages.

There’s just a great deal of more tweaking that has to happen.

Meanwhile, I’m moving forward with more rigging options in Blender. In the next entry of the journal, I’ll go through my success and failures with Auto-Rig Pro bringing this same Daz Character back into Blender. 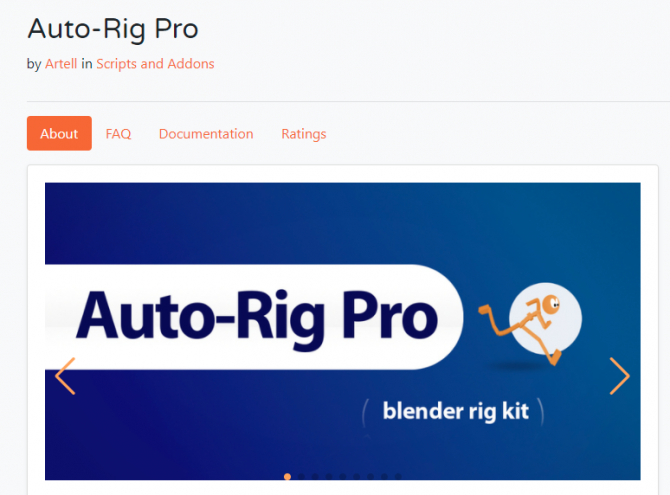